This is a past event

TIWI celebrates the unique art and culture of the Tiwi people of Melville and Bathurst Islands and explores the dynamic trajectory of Tiwi art across time and across media, from 1911 to now. TIWI comprises 153 works rigorously selected from the NGV collection, supplemented by 130 loans of rare historical objects and contemporary works drawn from Australian public and private collections.

TIWI focuses on art, which is just one part of a performative tableau of oral, visual and dance culture that embraces Tiwi identity. The original inhabitants of Melville and Bathurst Islands, the Tiwi, have been separated from mainland Aboriginal peoples and from murrintawi (white people) for much of their history. Evidence of Tiwi ingenuity, brought about in part by their geographical position, is found in their language, customary ceremonies, material culture, kinship system, and sexual politics. The two principal cultural events for the Tiwi are the pukumani (mourning) and kulama (coming of age) ceremonies, both of which are unrestricted in relation to age and gender.

Tiwi art is intimately connected with song and dance and with jilamara, the idiosyncratic body painting designs with which performers celebrate kulama and conceal their identity from mapurtiti (spirits of the deceased) for pukumani ceremonies. The spirit of each work resides in the Tiwi notion of individual creativity, expressed through turtiyanginari (colour), patterns of marlipinyini (lines), kurluwukari (circles) and pwanga (dots), and the randomness of the decoration. For Tiwi people, to sing is to dance is to paint. A painted design on any surface has deep associations with singing and dancing and elements of Tiwi language and culture that are non-verbal. It ranges from bold and energetic tutini (poles) and figurative sculptures, paintings and ceramics rich in storytelling, to monochrome etchings and subtle lineal designs made with a pwoja (wooden comb) that reference miyinga (customary scarification markings). Moreover, the seemingly abstract painted compositions on bark and canvas that resonate ‘Tiwiness’ are a vital form of contemporary art.

TIWI avoids a linear chronology and is divided into thematic spaces, the first of which is devoted to figurative works that tell the story of Purrukuparli, which explains how death came to the Tiwi and the pukumani ceremony originated. The aesthetics of Tiwi art is ever present and constantly changing in each space. An exhibition highlight is an asymmetrical display of historical and contemporary tunga (bark baskets). The massing of pukumani tutini (poles), ranging from 1912 to now in a space devoted to the poetics of mourning and the honouring of individual creativity creates a spectacular forest of monumental Ironwood forms rich with blocks of Tiwi ochres and markings. Interspersed with these cultural objects imbued with cultural memory and associations with ceremony are spaces devoted to paintings on stringybark, 1954 to now, and contemporary works on canvas and paper, limited edition prints, and batik textiles, imbued with pumpuni jilamara (good design).

TIWI also premiers YOYI (Dance), 2020, an exciting multi-channel projection video work, which comprises sound and moving image of twenty-five individual Tiwi dances performed on Country specific to these artists from Jilamara Arts & Crafts Association. These dances fade in and out and are accompanied by an audio track of songs in Tiwi language, which brings an experience of Tiwi songs, dances and Country into the exhibition space.

As this exhibition attests, Tiwi art occupies a continuum. Like a tree, it continues to change and grow, drawing sustenance from its cultural roots. The works displayed in TIWI, the largest exhibition of Tiwi art that has ever been presented, range from 1911 to 2020. The exhibition highlights the work of great Tiwi historical and contemporary artists, both female and male, and celebrates it as art not ethnographic artefact. 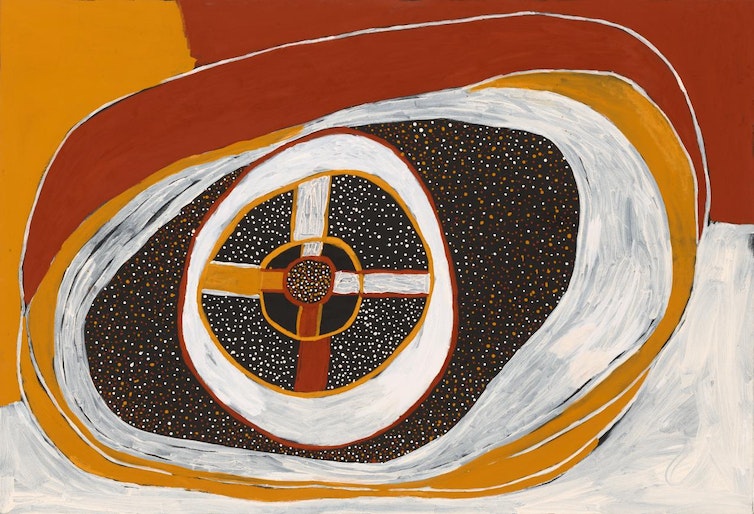 The Ian Potter Centre: NGV Australia is the world’s first major gallery dedicated exclusively to Australian art. It is a spectacular showcase comprising over 20 galleries housed within a landmark architectural complex.

NGV Australia presents the history of Australian art from the Colonial period and the Heidelberg School through to contemporary art and includes photography, prints and drawings, fashion and textiles, decorative arts, and a suite of galleries dedicated to Aboriginal and Torres Strait Islander art.

With special exhibitions and educational programs and new perspectives of the city through its glass matrix, NGV Australia is more than a great place to view art – it is a completely fresh approach that encourages people from all walks of life to enjoy the world of art.