Stories from the people who work, walk and play at Fed Square

Have you ever wondered what stories lie under the surface of Fed Square? Who the people are that you walk past and what’s going on in their lives? Well, we’ve got a fun new segment for you: Fed Folk. Each week, we’ll catch up with a person who works, walks or plays here at Fed Square. It could be a journalist from SBS or a curator from the Koori Heritage Trust or someone who eats their lunch here every day – it could be you! So, watch out for us in the Square, as we’ll be on the lookout!

And if you’ve got a story to tell, tag us on Instagram with #FedFolk and we may be in touch!

Meet Ellora, the fount of all Fed Square knowledge 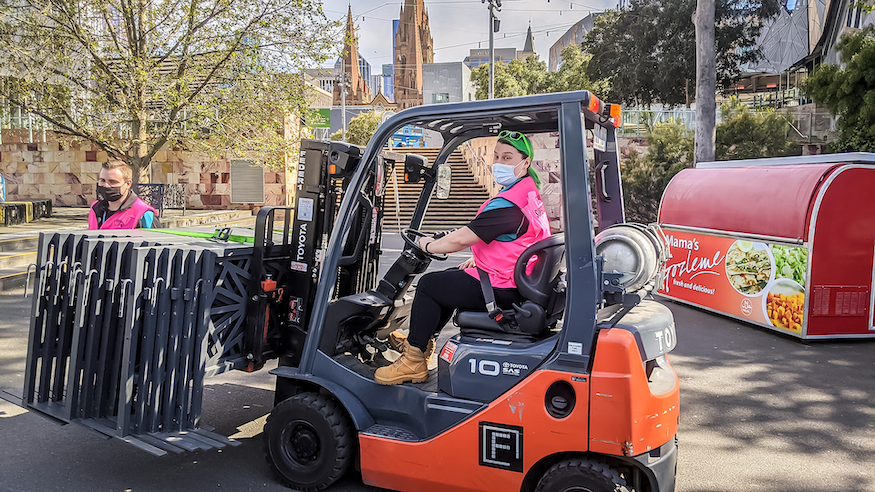 When you have a heritage-listed public square that’s not a square, that’s built over a train line, covered in undulating cobblestones and hosts thousands of events a year (in normal times), you want to have an events operations person that knows their stuff, right? Well, that’s Ellora. With an in-built mental data map of the whole site and the keys to the place, Ellora is one of a team of event operations staff that make things happen at Fed Square. We talked to her this week about what her job is like, what she’s been doing in lockdown – and about making friends with a duck at Sky Castle last year.

Hey Ellora, tell us a bit about yourself and your job at Fed Square.

Though the title has changed over the years, I am an event operations supervisor, which is quite difficult to define. Basically, I ensure the safe installation and operation of events that take place at Fed Square from bump in to bump out, and I have been floating around now for about four years.

What does a typical day look like in your job?

All people in events will say that there is no such thing as a typical day and with current restrictions my days now are vastly different to what they used to be. However, if I turn back the clock to the start of 2020, my typical day consisted of about four coffees, 25,000 steps, jumping on the forklift, setting up event infrastructure, liaising with event clients, cleaners, security, completing risk assessments, and enjoying all the amazing events that take place at Fed Square.

What would most people not know about what you do in your job.

I guess an interesting fact would be that I have memorised different aspects of Fed Square – such as all the locations that have access to power and the types of outlets that are in them, or the different weight loading areas and how to calculate the weight loading of a vehicle on the spot.

Having this information at the top of my head makes solving problems easier and minimises delay. For example: if a coffee cart needs to be in a certain location for an event, and I was briefed that the cart requires a 15-amp port, but they arrive onsite with a different machine due to a fault and this one has a 20-amp plug – I would know that a 20-amp power outlet is available seven meters away and have a 20-amp extension lead available onsite, so the site map won’t need to change. That’s probably not interesting to most people, but I love knowing where all the solutions to potential problems are before they occur and having extensive knowledge of our site helps.

Do you have any interesting or unusual stories that you can share with us, about what has happened in your job?

During last year’s Sky Castle event one night, I was standing by to deflate it at 11pm, when I noticed a duck walking around the activation. Now it was a lovely warm night so there were still a tonne of people around, so I was amazed at how close this duck was waddling around people. I think at some point it noticed me watching it and came over to where I was sitting. Now I cannot express how chill this duck was – it let me touch and eventually it just settled between my feet and just fell asleep. Unfortunately, I did need to move (a crime, I know), but while I was packing down Sky Castle it just followed me and the security staff around. Eventually it just flew away – but that was definitely the cutest moment I’ve ever had at Fed Square. 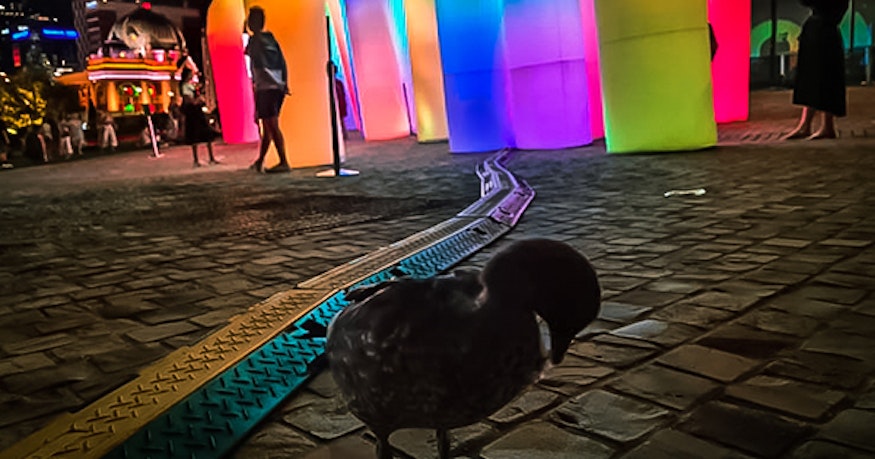 Any favourite memories of working at Fed Square you can share?

My favourite memory would have to be NYE 2019-20, we had a DJ playing all the hits from the decade. They started playing Fix you by Cold play and the entire crowd started pulled out their phone lights and started singing along and it was so beautiful. Then beat dropped and my brain immediately tried to calculate the KPA rating of 10,000 people all jumping up and down at once.