Christmas in the Wizarding World

Come one and all – witches, wizards and Muggles – for a truly spectacular celebration of Christmas in the Wizarding World at Fed Square!

There will also be free ice-cream available next to the Main Stage prior to the screening, if you use codeword ‘BIRTHDAY’ – as it’s the 20th anniversary of the film’s release!

So, grab your wands (and your camera – there’ll be plenty of photo opps!) and dress up in your favourite Wizarding World-inspired costumes – there are some amazing prizes to be won for Best Dressed Individual and Best Group Effort. This is one not to be missed! 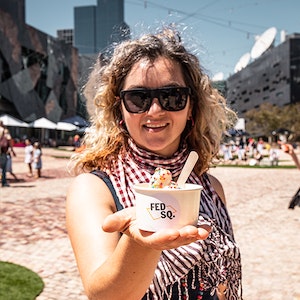 4pm | Next to the Main Stage

All your favourite pieces from the Harry Potter film scores will be bursting forth from our speakers at Fed Square from 4pm, so it’s time to get in the Wizarding World spirit! There’ll be a free Christmas in the Wizarding World photo opp, and from 4.30pm we’ll have free ice-cream giveaways by the Main Stage (limited numbers – so get there quick-smart!). Use the codeword ‘BIRTHDAY’ to get your freebie. 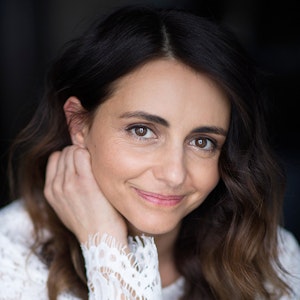 Be sure to rally promptly at 5pm, as Pia Miranda – actor and massive Harry Potter fan – will welcome you to Fed Square to commence the celebrations on the Main Stage. She’ll also be on the lookout for Best Dressed Individual and Best Group Effort to give away some pretty special prizes, so be sure to dress in your finest Wizarding World-inspired attire! 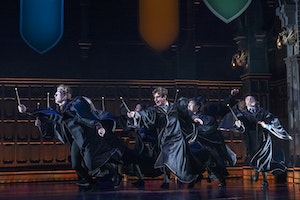 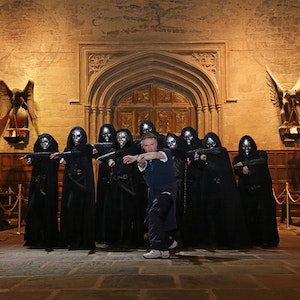 Wands at the ready! It’s time to participate in a virtual wand combat workshop with wand combat choreographer, Paul Harris, who worked on the iconic wand combat scenes in the Harry Potter films. There’ll be another special prize for Best Wand Combat moves! 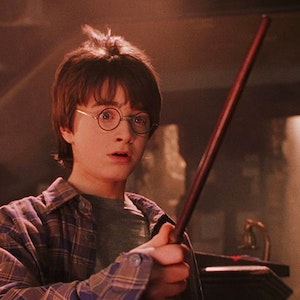 Join in the celebration of 20 Years of Movie Magic with a special free screening of Harry Potter and the Philosopher’s Stone at Fed Square. Relive the magic, or see it for the first time, and you’ll be one of the first to catch a special sneak peek of the new Magical Movie Mode film version! Don’t forget to dress up in your favourite Wizarding World-inspired costumes and be sure to take a selfie and post to social media with #20YearsOfMovieMagic and #FedSquare! 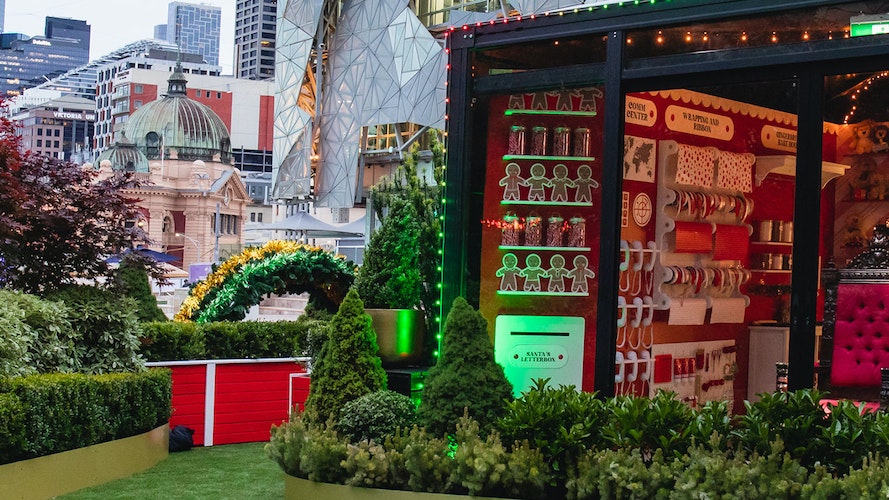 Ho-ho-ho, Melbourne! Merry Christmas! Come and visit Santa and his Elves, as he tinkers away in his Melbourne workshop, making toys and presents for the big day. Santa is a very busy man at this time of the year, surrounded by workshop tools and machinery, so he can’t invite children to sit down and have a chat. But don’t fret! The jolly Elves are ready and waiting to introduce you to the man in red. Santa will happily give a friendly wave and even pose for a photo, from a COVID-safe distance. Santa’s Workshop hours Early season operation: Saturday 13 November–Wednesday 1 December Santa’s hours: daily, from 10.00am – 12.00pm and 1:00pm – 3:00pm Peak season operation: Thursday 2 December–25 December Open to public: daily, 10:00am – 11:00pm Santa’s hours: daily, from 10:00am – 12:00pm and 1:00pm – 3:00pm. Thursdays and Fridays, extended hours from 4:00pm – 7:00pm In Partnership with:
More Info
13 Nov — 25 DecMain Square
Christmas
Fed Festive Season 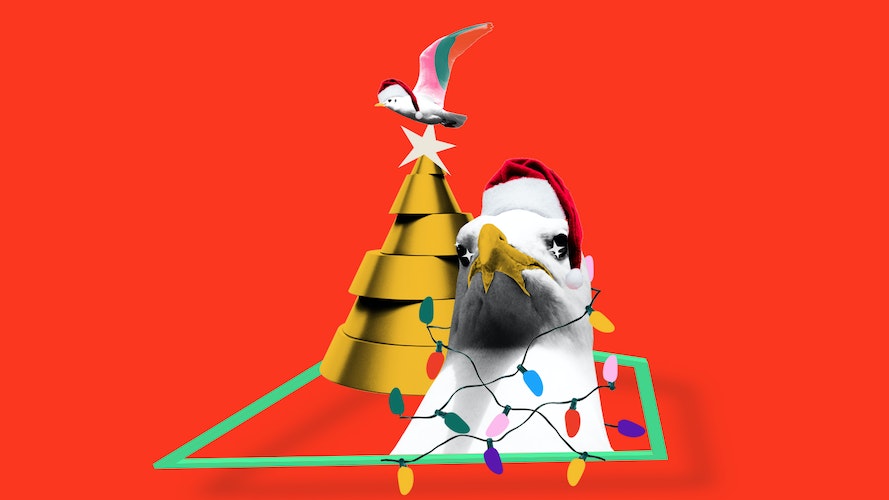 Christmas in the Square Get ready to get Fed festive, as we are turning up the fun dial to the max to celebrate the silly season, being out and about again – and being able to properly say hello, Melbourne! Of course, all your favourites will be back: Christmas Square, featuring the HUGE 16metre-high Christmas tree and ever-popular Santa’s Workshop for all those cute happy snaps with the big guy in red. While you’re there, you must also drop by to have a selfie with Fred and Fifi, dressed in their finest Christmas-themed get-up – they’re enormous light-up sculpture installations, thanks to the creative mastery of the team at A Blanck Canvas. Rounding out the action is the Pillars of Light festival for Chanukah; Koorie Kristmas with the Koorie Heritage Trust; Christmas in the Wizarding World at Fed Square, featuring a not-to-be-missed live performance from the cast of Harry Potter and the Cursed Child; followed closely by Wizard Week, where we’re screening all the Harry Potter films up on the Big Screen, marathon-style; a santa-sack-packed program of your fave Christmas films; the Fed Christmas Workshop series, featuring a sure-to-be-a-hot-ticket Christmas Wreath workshop with Melbourne floristry icon Flowers Vasette; and heaps more! Check out the full program below and start planning your Fed festivities this Christmas at the Square!
More Info
12 Nov — 25 Dec
Christmas
Fed Christmas Films on the Big Screen 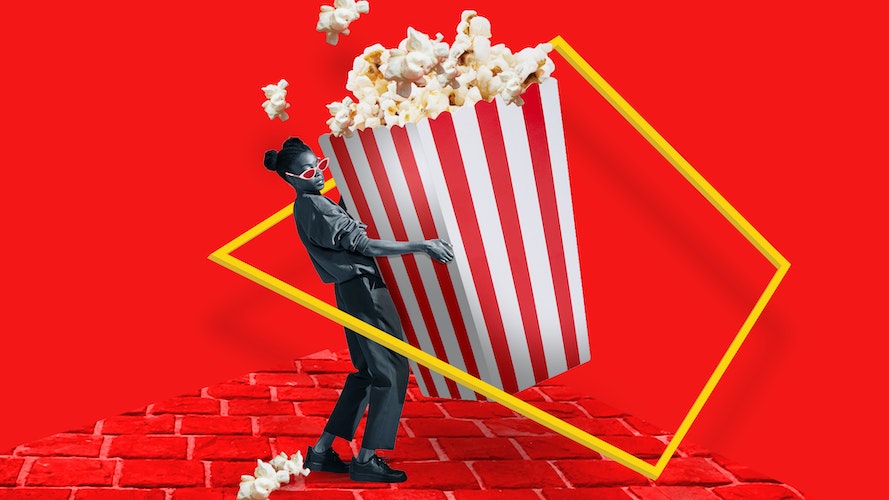 Get the fam together, your friends and loved ones, to enjoy a classic Chrissie flick on the Fed Square Big Screen And this year, we’ve got a cracking selection for you to enjoy while relaxing in our deckchairs or picnicking it up on our green astroturf. Covering the whole gamut from the comic ridiculousness of National Lampoon’s Christmas Vacation through to dead-set classics like Love Actually, you’ll find something that’ll warm the cockles this Festive Season. We’ve also got a special People’s Choice film for you to round out the program. Check out the full program of classic Christmas Films below, plan your Big Screen Christmas adventure, and get voting for your people’s choice film!
More Info
10 Dec — 18 DecDigital Facade
Christmas
Discover
What's onEat + DrinkShop + VisitVenue Hire
English
Website byMore Studio
Links
AboutMedia CentreAccessibilitySustainabilityFed CamCareersParkingBuskersFilming and PhotographyContact Us
Social
FacebookTwitterInstagramYoutubeLinkedInTripAdvisor
FavouritesTenant PortalPrivacy PolicySubscribe
Acknowledgement
At Fed Square, we acknowledge that we are gathered on the lands of the Kulin nations. We respect their traditions and embrace their traditional and contemporary expression.
Website byMore Studio